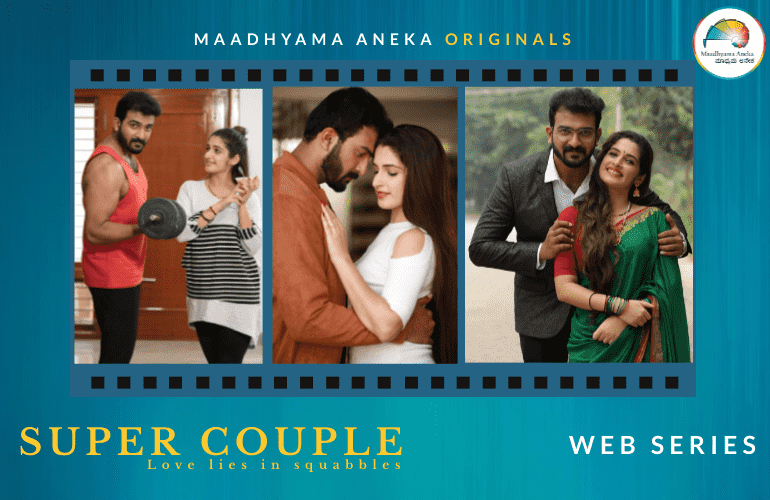 Maadhyama Aneka Pvt. Ltd., Bangalore based Media Production House has announced their entry into the Web Entertainment segment. The first Web Series in Kannada Language that they are bringing out is titled as Super Couple. Super Couple is a Sitcom series about a young couple Sharvari and Eshwar. The series depicts humorous situations in their day-to-day life which is common in every other couple’s life that the audience can relate to. The series aims to bring comical entertainment without jarring or garish, or vulgar slapstick story-telling heavily laced with innuendos.

Maadhyama Aneka started the operations in 2018 with a vision to build value based, coming-of-age and superior quality content for the entertainment and infotainment segments. In the past 2+ years of journey, as a Media House, Maadhyama Aneka has demonstrated capabilities in producing documentaries, talk shows and web-based entertainment content in Kannada language.

The OTT market in India is seeing the rise of regional language video streaming platforms. In the regional language market space, Bengali, Marathi, Tamil and Telugu language content are emerging as the four leading languages for regional content. Netflix, Amazon Prime Video and Hotstar have recently started acquiring and developing regional language content in these languages. SVF Entertainment-backed Bengali OTT platform Hoichoi, launched in 2017, was one of the first movers in the category. Three years on, there are exclusive platforms that stream Telugu, Malayalam and Marathi content. Manorama Max, a Malayalam online entertainment platform online, made its appearance in late 2019. Aha, a platform for Telugu movies and shows, Talkies, a streaming service for Tulu, Konkani and Kannada content, and Planet Marathi, targeting Marathi speakers, were all launched in 2020. Production houses, too, are shifting focus to regional language shows.

We are yet to see any prominent regional OTT streaming platform focused on catering to Kannada language original content. The mainstream OTT platforms such as Netflix, Amazon Prime Video and Hotstar are yet to take interest in Kannada. There is clearly a big lacuna for Kannada originals. Maadhyama Aneka sees this as an opportunity in the regional space particularly in Kannada language and hence in 2020 they started putting their focus on creating a roadmap for creating Entertainment content for Web Platforms.

Maadhyama Aneka’s announcement of their entry into Web Entertainment content comes at a point when the demand for OTT content is on the rise while there is a dearth of content producers in Kannada language for web platforms.

© Maadhyama Aneka. All rights reserved 2020.
You cannot copy content of this page