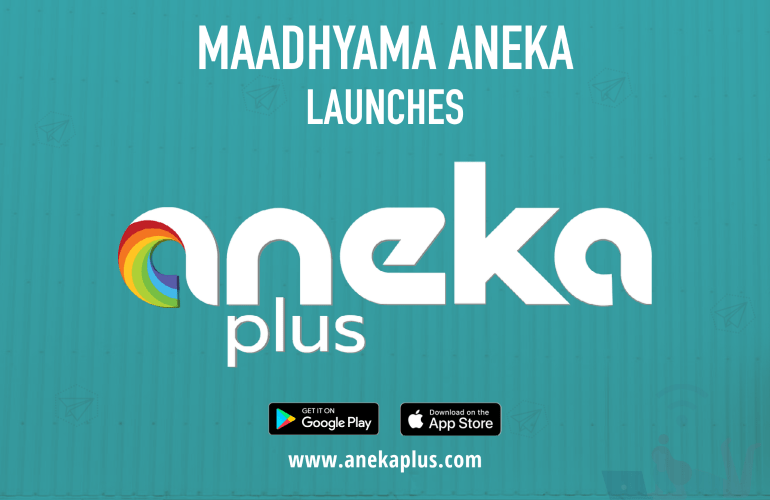 Maadhyama Aneka is proud to announce the launch of its OTT platform Aneka Plus which offers original content in Kannada and other languages. Aneka Plus is now live and available on Android Playstore, iOS App Store and on website www.anekaplus.com. The audience can expect a wide variety of entertainment content and infotainment content on the OTT.

With the core objective of bringing quality content through its OTT Aneka Plus, Maadhyama Aneka has also been laying the foundation to create and nurture an ecosystem of filmmakers, writers, artists and technicians to produce content for web format. Through Aneka Plus, we intend to bring out home productions as ‘Maadhyama Aneka Originals’ which are carefully and tastefully crafted content with freshness in the concept and storylines. In addition to the in-house productions we also intend to source quality content from other creators as well – so the launch of Aneka Plus also opens up opportunities for creators to experiment with a variety of concepts and produce quality content. The entertainment content will be in Kannada and other languages.

The OTT platforms have been emerging as the front-runners in the entertainment business since the past 2-3 years. The pandemic situation made way for the OTT platforms to be the best source of entertainment content. The audience are slowly but steadily switching to OTTs for consumption of entertainment content. It is estimated that the revenue earned collectively from OTTs was significantly higher than the revenue earned from showing films in cinema halls during the ongoing pandemic. The OTTs turned out to be the saviour for some filmmakers to monetize their content through various monetization models. The OTT platforms also provide excellent opportunities to young filmmakers and freedom to experiment with variety of concepts and storylines for seasoned filmmakers. However, we are yet to see any prominent regional OTT streaming platform focused on catering to Kannada language original content. The mainstream OTT platforms such as Netflix, Amazon Prime Video and Hotstar are yet to take interest in Kannada. There is clearly a big lacuna for Kannada originals. Maadhyama Aneka sees this as an opportunity in the regional space particularly in Kannada language and hence in 2020 they started putting their focus on creating a roadmap for producing Entertainment content for Web Platforms. Maadhyama Aneka’s announcement of OTT comes at a point when the demand for OTT content is on the rise while there is a dearth of content producers in Kannada language for web platforms

About Maadhyama Aneka
Maadhyama Aneka Pvt. Ltd., Bangalore based Media Production House. Maadhyama Aneka started the operations in 2018 with a vision to build value based, coming-of-age and superior quality content for the entertainment and infotainment segments. In the past 3+ years of journey, as a Media House, Maadhyama Aneka has demonstrated capabilities in producing web-based entertainment content, documentaries and talk shows in Kannada language.
The talk show series “ಬಿಚ್ಚಿಟ್ಟ ಬುತ್ತಿ” was the first production of Maadhyama Aneka started in 2018 with the objective of documenting the life, works and thought processes of accomplished personalities from various fields such as literature, cinema, music, dance, agriculture, theatre etc., The series successfully raised the standard and format of interviewing the personalities.

In early 2020, Maadhyama Aneka announced its entry into the Web Entertainment segment with its first Web Series product in Kannada titled as Super Couple. The first season of Super Couple series got an excellent response and subsequently season 2 was released in 2021 during the lockdown. The response received by the audiences for both the series was highly encouraging and it demonstrated the market potential for original content in Kannada languages;
In 2021, Maadhyama Aneka announced to launch its own OTT which offers original content in Kannada and other languages.